Posted on November 7, 2022 by teachingbattleground

There’s been a fair amount of research into integrating the sciences and the arts in education – and beyond – in recent years. But when they’re given a choice, are students likely to opt for a STEAM combination of subjects? And is the popularity of STEAM on the rise?

In this post, I’ll try to answer these questions by looking at the subjects studied by Key Stage 5 students from 2017-21, using data from the National Pupil Database. Unfortunately data for 2022 isn’t available for research just yet.

Trends in STEM and arts entries

We’ll start with a look at trends in entries to STEM subjects and arts subjects separately. 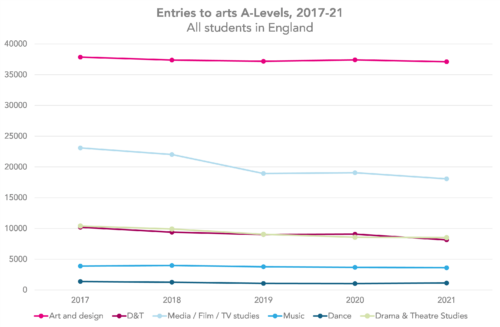 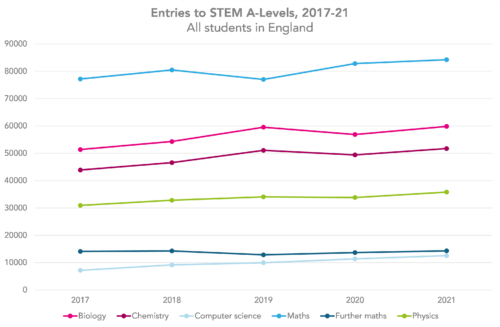 Entries to STEM subjects at A-Level have increased over the last five years, while entries to most arts subjects have fallen.

Broadly speaking, STEM subjects are more popular than arts subjects. But the most popular arts subject, art and design, has more entries than STEM subjects such as physics and computer science, and had a boost in entries in 2021.[1]

Now let’s take a look at BTECs.[2] In the charts below, we show the total number of entries to any Level 3 BTEC in the relevant subject, including awards, certificates and diplomas. 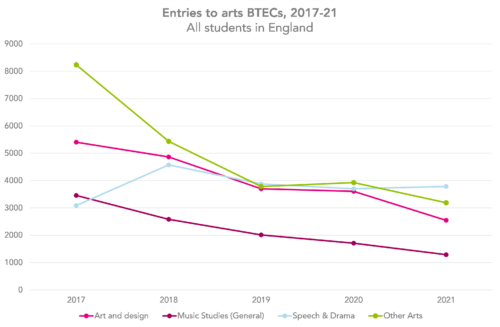 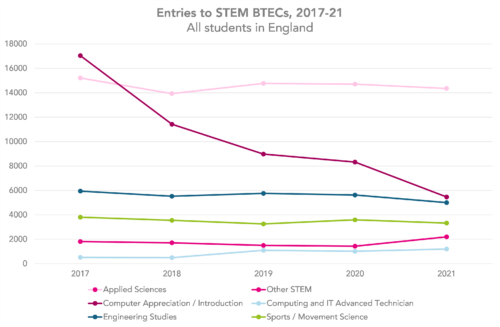 Some of the falls in entries year are likely linked to qualifications that are no longer counted in performance tables.

T-Levels are as yet still too recent a development for trends to be visible.

Before we look at trends in STEAM entries, it’s worth a pause to look at the combinations students are selecting. We’ll start with A-Levels. 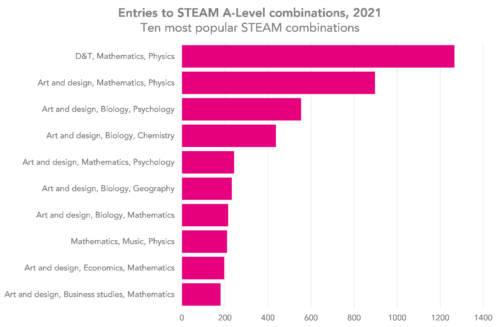 When we bring in BTECs, things get a little more complicated. Many students study a single BTEC, but some of these, such as music technology, could be said to be STEAM subjects in themselves.

For those students who do study more than one BTEC, STEAM combinations are unusual – the most popular (Applied Sciences, Speech & Drama) had just 16 entries in 2021.

With the advent of T-Levels, we can perhaps expect STEAM combinations in vocational KS5 qualifications to become rarer.

The rise of STEAM

So has there been an increase in entries to STEAM subject combinations? 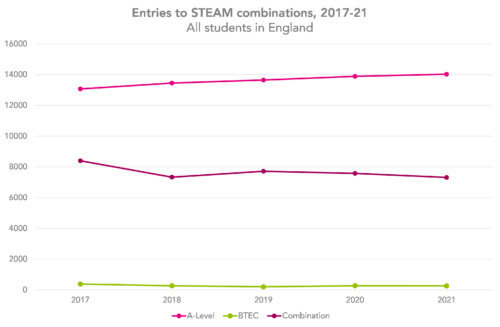 There does indeed appear to have been an increase in STEAM A-Level entries over the last five years. This is particularly interesting in the light of the general decline in entries to arts subjects at A-Level.

STEAM combinations involving BTEC, or a mixture of BTECs and A-Levels, are much less common and have remained flat over the last three years.

The rise in STEAM entries has coincided with an increase in entries to STEM subjects. So it may be the case that as STEM entries have increased, they have come to include a broader range of students, including more who are interested in both STEM and the arts.

On the other hand, it may be that STEM and / or arts students are more open to STEAM combinations than they were in the past. 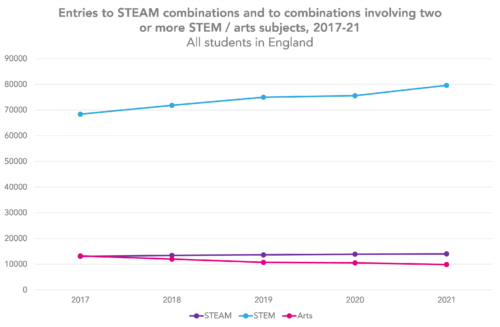 Let’s take a look at the demographics of the students studying a STEAM combination of A-Levels. 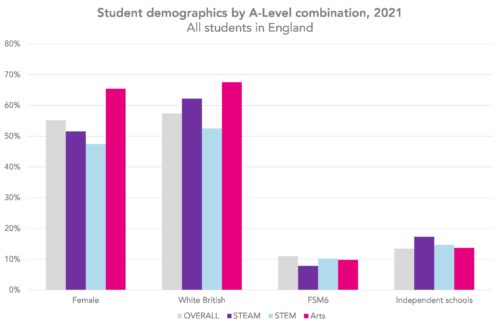 STEAM A-Level combinations have become somewhat more popular over the last few years, but they are still much less popular than all-STEM or all-arts combinations.