Posted on November 8, 2022 by teachingbattleground

Just before half-term the Department for Education published Progress 8 scores for secondary schools for the first time since 2019.

We’ve written before about the problems with Progress 8 and offered solutions for some of them. We’ll revisit some of these as the year progresses.

In this blogpost, we’re going to look at the relationship between Progress 8 scores and the number of qualifications entered by pupils.

Do schools which enter pupils for more qualifications tend to achieve higher (or lower) Progress 8 scores?

I use the school-level data published by the Department for Education. This contains a number of aggregate (average) measures for each Year 11 cohort in each school in the 2021/22 academic year. In particular, I am interested in the average Progress 8 score for a school and the mean number of qualifications entered by pupils.

Entries in GCSEs, AS-levels and up to 3 other approved qualifications are included for each pupil in Performance Tables. Progress 8 is based on a subset of these qualifications[1].

Although the average number of entries per pupil in GCSEs, AS-levels and up to 3 other approved qualifications is presented in the published school-level data, entries in GCSE double science only count as one entry. However, under Progress 8 they count as two entries. So to try and make things consistent, I adjust the average number of entries per pupil at each school to include an extra entry for pupils taking double science.

With our adjustment for double science, we find that pupils entered on average 8.9 eligible qualifications in 2022.

However, there are some small differences between regions. Pupils in London entered 8.7 GCSEs on average, compared to 7.7 in Yorkshire and Humber and 7.8 in the North East. There will be a number of reasons for this, including a higher rate of entry in community languages in London, but that’s a story for another day.

They also entered fewer “other” qualifications (0.4 per pupil in London compared to 1.0 in Yorkshire and the Humber and the North East). 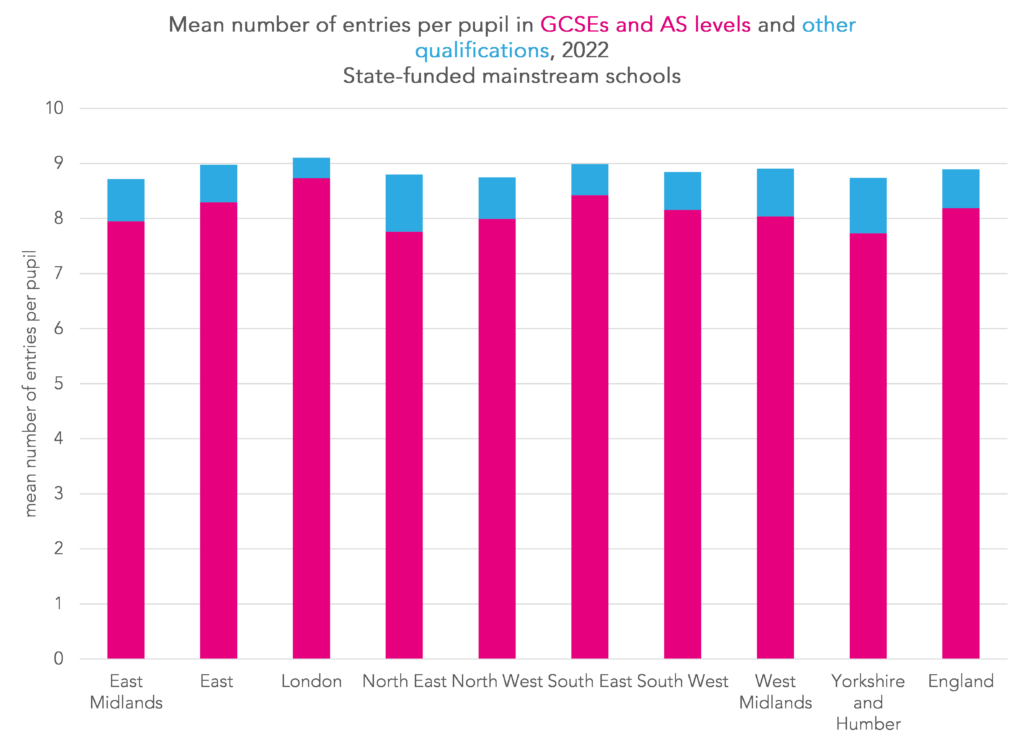 The relationship between entries and Progress 8

The heatmap below shows the relationship between the mean number of entries per pupil and Progress 8 in 2022.

We’ve used a heatmap in place of a scatterplot to give a sense of where there are concentrations of schools. Red indicates larger clusters of schools. This feature tends to get lost in a 2-D plot. 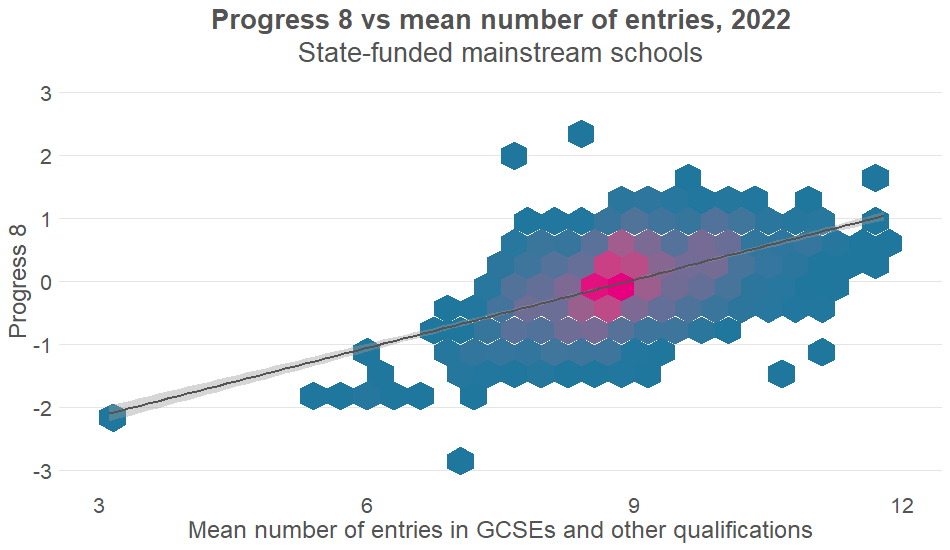 This shows that schools that tend to enter pupils for more qualifications tend to achieve higher P8 scores. The correlation (r=0.51) is moderate. On the whole, the mean number of entries per pupil is between 7.5 and 10.5 at most schools, with some smaller schools offering curricula not well-aligned with Progress 8 (such as university technical colleges and studio schools) tending to have fewer entries.

Clearly, this is correlation rather than causation. At this stage at least.

We’ve shown in the past that some qualifications are graded more favourably than others. So Progress 8 is related to which subjects qualifications pupils take as well as how many.

But if we only include the sub-scores for English and maths in the Progress 8 measure (the two subjects that almost all pupils take), the heatmap looks remarkably similar albeit with a slightly lower correlation (r=0.41). 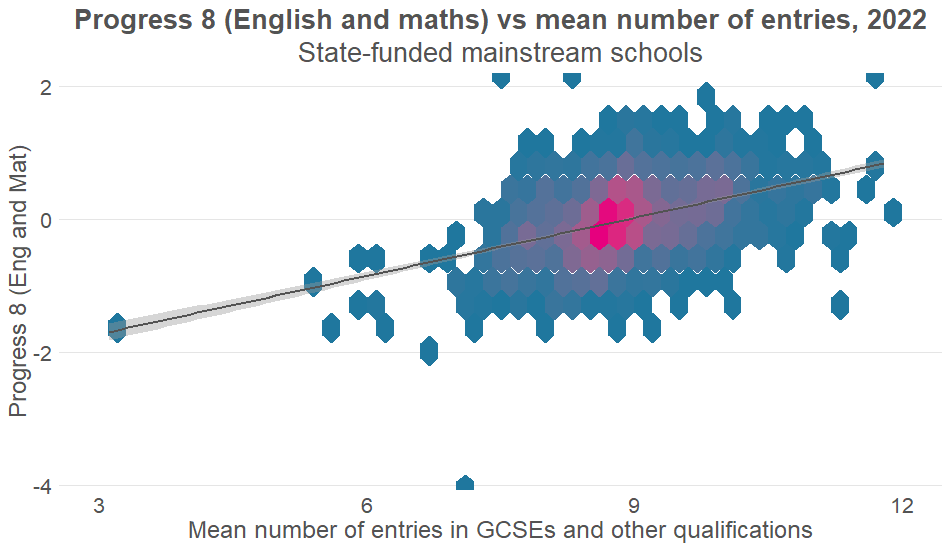 What explains the difference?

If we were to fit straight lines through the clouds of points in the heatmaps above, it would imply that an increase of 1 GCSE (or alternative) qualification is associated with an increase of 0.36 in Progress 8 overall and 0.29 in English and maths.

In the table below, we look at the school-level correlations between

There is small to moderate correlation between most pairs of measures. In particular, mean entries is associated positively with mean Key Stage 2 scaled score and negatively with disadvantage.

We use a simple linear regression to see how the relationship between Progress 8 and mean number of entries per pupil changes as we include other factors[2].

On the surface, school-level Progress 8 scores appear to be correlated with the mean number of qualifications entered by pupils at each school.

However, this correlation reduces (but does not disappear) once we control for basic demographic differences between schools and limit the analysis to English and maths, thereby ignoring differences in the subjects offered by schools.

So why does the slight correlation remain?

Clearly, a pupil who only enters 8 eligible subjects will have all of them counted. But pupils who enter more will have their lowest grades discounted if their Progress 8 slots have been filled by other qualifications. The fact that some subjects are graded more reliably than others also plays a part here.

But that’s only a suggestion. There may well be other explanations. We’d be interested to hear them.