Has the marshmallow melted? Interventions involving executive functioning may have little effect on student achievement after all.

Posted on March 11, 2015 by evidenceintopractice

What are executive functions?

Executive functioning is, in some ways, a pesky cognitive ability to define as it’s implicated in so many different functions. It’s a hypothesised capacity for things like problem solving, reasoning, planning and organisation, inhibition action or speech within context appropriate norms and managing attention control (amongst others).

These functions develop rapidly in early childhood, then slowly throughout adolescence and early adulthood – reaching a peak in our mid-twenties before gradually beginning to decline. 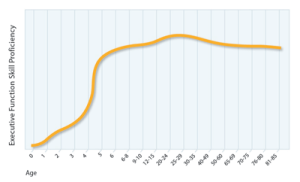 It’s one of the areas of the brain which is much greater in size (relative to the rest of the brain) in human beings compared to other primates and other species of hominid. The main reason appears to be the…

This entry was posted in Uncategorized. Bookmark the permalink.