Posted on November 3, 2022 by teachingbattleground

The COVID-19 pandemic led to one of the biggest shocks the world has ever seen. Schools were shut, remote instruction became widespread and government policy seemed to be changing overnight. The working conditions of teachers hence suddenly changed, with significant disruption from the pandemic lasting for the next two years.

This is likely to have had a major impact on teachers’ mental health, including their wellbeing at work. As part of a project supported by the Nuffield Foundation , we have tracked teachers’ anxiety about work at 75 points between October 2019 and July 2022.

Specifically, we regularly asked the TeacherTapp panel to answer the following question on a Tuesday afternoon:

“On a scale where 0 is ‘not at all anxious’ and 10 is ‘completely anxious’, overall, how anxious did you feel about work today?”

This blog provides a whistle-stop tour of ten of our key findings. Further details are available in the accompanying academic working paper released today.

1. Teachers felt slightly less anxious about work during the first COVID wave than before

The chart below presents the percent of teachers (excluding headteachers) who felt highly anxious about work during the 2019/20 academic year. The dashed vertical line is mid-March 2020, when the COVID pandemic was starting to impact life in the UK. 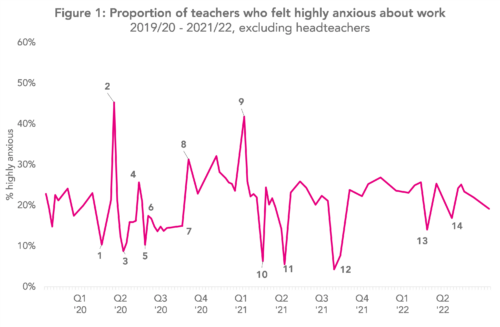 Around 20% of teachers in England were highly anxious about work between October 2019 and mid-March 2020 (pre the pandemic hit). When the first lockdown was announced, this shot up to around 40% of teachers.

However, after this initial shock, teachers’ work-related anxiety for the remainder of the 2019/20 academic year was slightly lower than during the pre-pandemic period – standing at around 15%.

2. Working hours were lower than usual for teachers during the first COVID wave

One possible explanation for teachers having lower levels of anxiety about work during the first COVID wave is that they were working fewer hours than usual. Table 1 illustrates how the average classroom teacher was working around 30 hours per week in May/June 2020, compared to around 45 hours during the same months in 2021 (when schools were starting to return to normal). 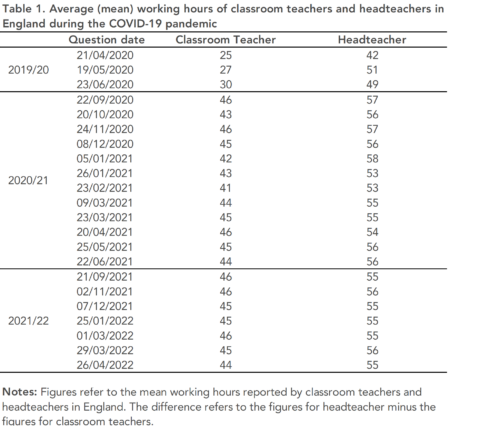 3. Headteachers have had one hell of a time.

Over the last two and a half years, headteachers have had one hell of a time.

Before the pandemic hit, 25% of headteachers were highly anxious about work, which was only slightly above the level of class teachers (20%).

But this changed dramatically once the pandemic hit. 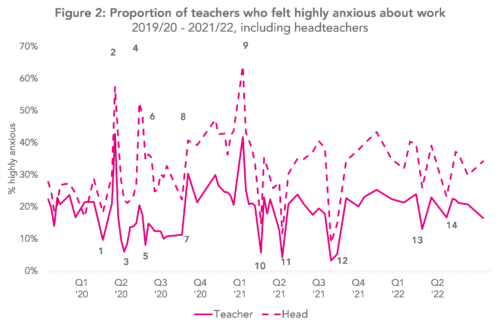 Outside of school holidays, 30-40% of headteachers regularly had high levels of anxiety about work during the pandemic. This reached a peak of 65% in January 2021, when the government was doing the Okie-Doki about whether to shut down schools.

These are quite shocking figures. And show just how severely our school leaders have been affected by the fallout from the pandemic.

Table 2 illustrates how the pandemic differentially impacted the anxiety levels of teachers working in state versus independent schools. The figures refer to the difference in anxiety scores along the 0-10 scale, with positive values illustrating where independent schoolteachers were more anxious than their state school counterparts.

Overall, there was little difference in the anxiety levels of teachers working in the state and independent sectors. The one exception was during the first lockdown, where the anxiety scores of independent schoolteachers were around 0.6 points higher (on the 0-10 scale) than those working in state schools.

5. …this may be due to them being early-adopters of technology and longer working hours.

One of the reasons why independent schoolteachers felt more anxious about work during the first lockdown than state schoolteachers may be that they were completing different activities.

Table 3 illustrates how independent schoolteachers were early adopters of live lessons and much more likely to be generating new learning content at the start of the pandemic. They were also working, on average, up to ten hours more than state schoolteachers per week.

This changed during later waves of the pandemic, including during the second period when schools were shut in January 2021. Independent and state schoolteachers were now working similar hours, the gap in the provision of live online instruction had shrunk, with state schoolteachers now the more likely to be developing new learning resources.

6. Anxiety levels were generally similar between primary and secondary teachers, as well as those working in different types of school.

A short and sweet one here……

We explored differences in the anxiety levels of teachers working in different types of schools during the pandemic. This includes differences between primary and secondary phases, by Ofsted grade and the percent of disadvantaged pupils. Little difference by these characteristics was found.

Returning to Figure 2, there is some something interesting about the Omicron wave (December 2021 and February 2022).

There was still quite a bit of chaos in schools at this point, in terms of high levels of staff and pupil absence. Yet teachers’ anxiety levels had largely returned – and stayed around – pre-pandemic levels.

The same is not true for headteachers, though. During the Omicron wave around 35% felt highly anxious about work, compared to around 25% in the pre-pandemic world.

8. Anxiety about work increased by more for women than men

Women are typically more anxious than men. This holds true across the general population, and for teachers as well.

In terms of the gender difference, having kids (particularly young kids) made a difference.

As Figure 3 illustrates, before the pandemic male and female teachers with children under the age of 5 were reasonably similar in terms of their anxiety about work. But this changed significantly during the pandemic. Women with under 5s became much more anxious about work than male teachers with under 5s, particularly the period after schools first re-opened in September 2020, and between September 2021 and February 2022 (including the Omicron wave). 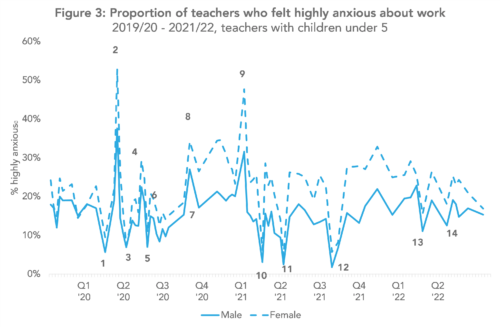 10. Teachers do shut-off from work – at least a bit – during the school holidays.

Let’s end with some good news, shall we?

In Figures 2 and 3, you may have noticed that there are some pronounced drops in the percentage of teachers who feel highly anxious at certain points. It is perhaps no surprise that these drops coincide with the dates of the school holidays.

Teaching is one of those jobs that it’s tough to shut-off from. And we all know that a lot of teachers continue to do some work during the school holidays.

But it is also clear that most teachers do manage to get some kind of break and become more relaxed as a result.