Posted on October 18, 2022 by teachingbattleground

Later this week the Department for Education (DfE) will publish provisional Progress 8 measures for secondary schools for the first time in two years.

Quite how much we will be able to read into measures of school performance given the differential effects of the pandemic on attendance is questionable.

Even then, Progress 8 scores for most schools aren’t that different.

Despite all of that, we still think that Progress 8 isn’t a bad measure. Clearly it’s not perfect. But it is much more equitable to pupils than threshold measures of raw attainment – such as the percentage of pupils achieving 5 or more A*-C grades including English and maths, the dominant measure prior to its introduction.

This is what we conclude in a new working paper we’ve just published. This is an updated version of work we previously published here.

What did we set out to do?

We set out to understand whether the introduction of Progress 8 encouraged schools to work more equitably. By this, we mean whether we could find evidence of schools focusing their efforts less on pupils at the C/D borderline (as it was in those days) and instead spread their effort more evenly across the full range of attainment.

We try to answer this question by analysing how attainment changed for borderline pupils relative to other pupils after the introduction of Progress 8.

This was not without its challenges.

Secondly, we needed a consistent measure of attainment over time. However, Progress 8 was just one of a series of changes to secondary school accountability introduced since 2010 that substantially affected the types of qualifications taken in schools and the measures of performance that were calculated. We therefore restrict ourselves to grades achieved in GCSE English language and maths.

Prior to 2017, GCSEs were graded A*-G. From 2017, they switched to 9-1 grades. The four grades of the A*-C range were stretched over the five grades of the 9-4 range. Because of this, we used standardised score in GCSE English language and maths as our outcomes [2].

We analysed data over a number of years but for our main results we look at the period 2012 to 2017. 2012 was the year comparable outcomes was (officially) applied to GCSE English and maths results. 2017 was the latest year of data available to us for the project.

Progress 8 was introduced in 2015/16 but had been announced in October 2013 to give schools sufficient time to plan for its introduction. We thought we might see schools begin to anticipate its introduction [3].

We set out our methodology in more detail in the paper but, briefly, we analyse the change in standardised score in English and maths for pupils in the above-borderline and below-borderline groups relative to the borderline group before and after the introduction of Progress 8. Results are summarised in the chart below. 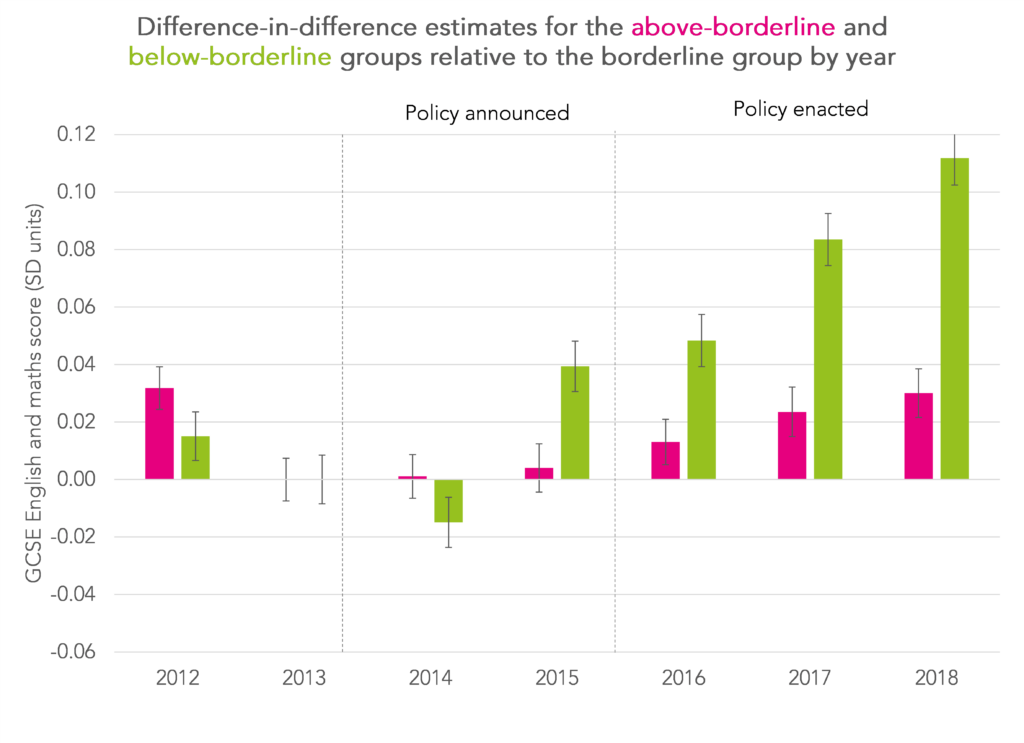 The effects are small but not trivial: our headline findings show a post-reform gain of 0.01 standard deviations (SD) in GCSE English and maths for the above-borderline group and 0.07SD for the below-borderline group.

Moreover, the effect for the below-borderline group increased in each of the first three years since it was introduced.

0.07SD means very little in the real world. In 2018 it translates 0.25 points in English and maths scores (equivalent to an eighth of a grade in both subjects).

Our results are consistent with the view that some schools had reacted to the previous regime of high implicit incentives for the exam results of students at the GCSE grade C/D borderline. Once that incentive was removed, the borderline group appeared to make less relative progress compared to other groups. Or put another way, pupils with lower prior attainment tended to make more relative progress compared to the borderline group.

We are, however, cautious in presenting these results. In the paper, we note the issue of trends subsequent to announcement but before implementation. We therefore judge the results to be supportive of the hypothesis but not clinching.

We are also aware that the results may have been sensitive to some of our modelling choices. That said, we ran a range of alternative models making different choices but these made little substantive difference.

This project was funded by the Nuffield Foundation, but the views expressed are those of the authors and not necessarily those of the Foundation. Visit www.nuffieldfoundation.org.