Posted on September 21, 2022 by teachingbattleground

In this blogpost, we’re going to return to the question of the extent to which pupils left mainstream schools during the pandemic, which we began to look at here.

This might happen for one of the following reasons:

The first two types of move are observable in data from the National Pupil Database (NPD) but the remainder are not.

Overall, the rate at which pupils left mainstream schools fell slightly during the pandemic (up to January 2022). But this was not the case for pupils with EHC plans attending secondary schools.

We use data from January school census from 2015 to 2022. This (in theory at least) provides a snapshot of all pupils on roll in state-funded schools [1]. We then scan School Census from the following January to identify pupils who have left the system. We also include the local authority alternative provision census which provides information on pupils educated outside the state-funded school system (e.g. in independent schools) for which local authorities pay fees.

We restrict ourselves to pupils of Reception age to Year 10 age. We do not include pupils of Year 11 age as they cease to be of compulsory school age the following year.

How many pupils leave the system each year?

The chart below shows the rate per 1,000 pupils of primary age and secondary age who left the state-funded mainstream school system in the previous year. 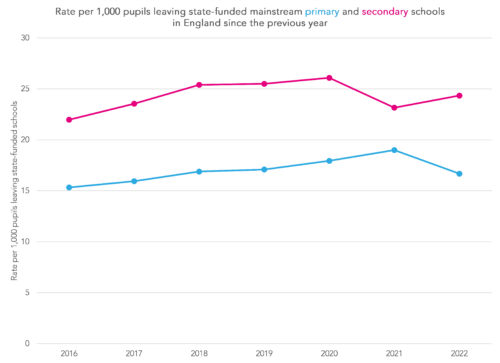 The rates tend to be higher for pupils of secondary age than those of primary age. The rates were increasing pre-pandemic (up to January 2020) after which the rate continued to increase in primary schools before falling between 2021 and 2022. In secondary schools, the rate actually fell between January 2020 and January 2021 before increasing slightly.

In the table below, we also show the rate of pupils who leave state-funded mainstream schools for other forms of state-funded education (the data from the chart is shown in the “all leavers” column). 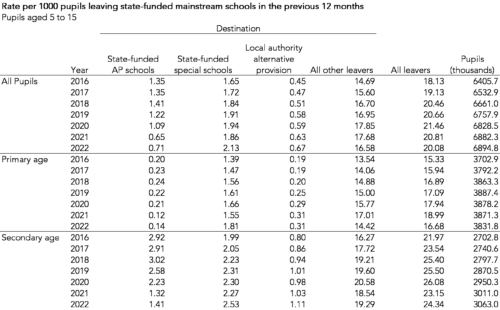 This shows that pupil moves into other forms of state-funded education are less common than moves out of the system as a whole.

Moves into state-funded AP schools, which had begun to fall pre-pandemic, continued to fall albeit at a faster rate. Some of this will be due to the reduction in permanent exclusions during the pandemic.

Moves into special schools, which had fallen slightly between January 2020 and January 2021 then increased again by January 2022. The rate of moves into local authority alternative provision has increased each year since 2016.

The story is different for pupils with EHC plans

The picture for this group of pupils is quite different.

Firstly, the size of this group has vastly increased since 2017 in primary schools and 2018 in secondary schools both as a result of an increasing population and an increase in the rate of pupils being issued with an EHC plan.

Secondly, the rates of pupils remaining in the state-funded system but leaving mainstream schools is far higher than in the general population. This is particularly the case for moves to state-funded special schools but there has been an increase in the rate of pupils moving to local authority alternative provision every year since 2016.

Because of the growth in numbers of pupils with EHC plans, it is also instructive to examine absolute numbers of moves.

The rate at which pupils below school leaving age left the state-funded education system appears to have fallen slightly since the pandemic started.

Of course, we don’t know why these pupils left. Perhaps the pandemic led to fewer families migrating or moving to the independent sector. In a previous post we noted that it seemed to be the case that numbers entering elective home education had increased since the pandemic.

We do not know much about the effect of migration on movements off the school roll. This is why efforts to track pupils using a common identifier are unlikely to succeed. No one would necessarily know about cases where pupils go away without their school being notified.

The rate at which pupils with EHC plans left mainstream secondary schools was higher in 2022 than pre-pandemic.

For whatever reason (funding and access to support services are likely to be contributory factors), mainstream secondary school sector as a whole (not necessarily individual schools) is struggling to accommodate pupils with EHC plans.

In particular, the rate at which pupils leave to local authority alternative provision (including placements at independent special schools) has increased markedly. This may be because places in state-funded special schools are unavailable due to lack of capacity. As the population of pupils with EHC plans grows, better data on special school capacity and co-ordination of place planning between local authorities is needed.