Posted on August 26, 2022 by teachingbattleground

We’ve so far collected 2022 GCSE data from over 1,000 state-funded secondary schools covering 174,000 pupils, roughly a third of the national cohort.

The data used in this blogpost is from our 2022 GCSE Early Results Service.  As well as providing a full national analysis of your school’s GCSE results, this year’s reports include attendance data collected via Attendance Tracker. This means that schools can assess the impact of absence on students’ results

In this blogpost we present some very rough analysis of this data.

As we showed in our preview post on Wednesday, absence rates for disadvantaged pupils have been far higher than for other pupils since the pandemic started.

We feared that the gap in disadvantaged pupils and their peers would increase as a result.

This was despite concerns about the comparability of data about disadvantage since changes were made to eligibility criteria in 2018.

However, early results suggest that the gap may not have widened much, if at all.

We compare data from 2022 with that from 2019 for schools that have supplied us with data in 2022. We use published 2019 data for this. 22% of the cohort in 2022 were classified as disadvantaged (eligible for free school meals in the previous 6 years) compared to 25% in 2019, slightly lower than the national average that year of 27%.

Data from these schools suggests a very, very slight increase in the attainment gaps in both English and maths since 2019.

The Department for Education will publish its gap index in the Autumn. During the pandemic, the disadvantage gap fell between 2019 and 2020 before increasing in 2021.

Whether we see the index remaining above 2019 levels we will see.

Despite lower results nationally, some schools’ results have increased compared to 2021

In a speech given in June 2022, the Chief Regulator at Ofqual said that “schools that get higher results than in 2021 will be few and far between, if any.”

In maths at least, nearly a third (33%) recorded an improvement in results. 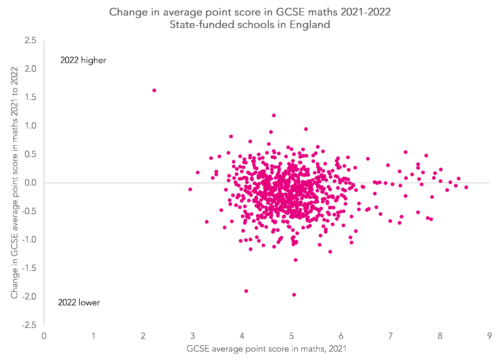 But even then, it looks like over quarter of schools increased the percentage of entries (in all subjects) graded 9-7 compared to last year. 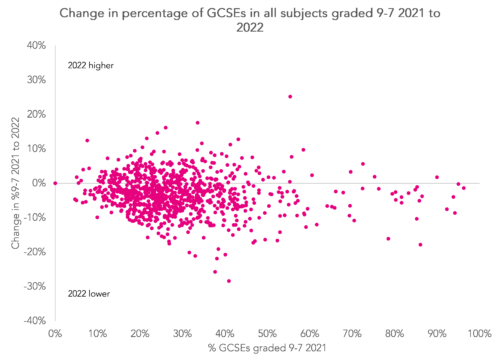 Compared to 2019, schools with the lowest rates of Year 11 absence in 2022 tended to improve their results by a greater margin

We calculate the absence rate for Year 11 pupils in 2022 at each school and divide them into five equally sized ranked bands based on this measure.

For each of the five bands we calculate the average point score (APS) in maths in 2019 and in 2022. This data is summarised in the following table.

As always, the picture for individual schools is more complicated. In the chart below, we compare the change in GCSE maths APS between 2019 and 2022 among schools in the lowest fifth and highest fifth of schools for Year 11 absence. 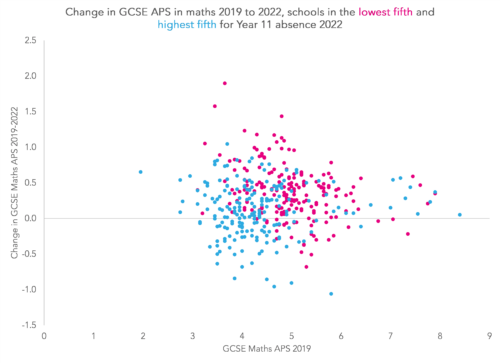 This shows that there are schools with high rates of Year 11 absence in 2022 which nonetheless improved attainment in maths compared to 2019 by similar (or even higher) margins than schools with lower rates of absence.

Obviously, there may be much more going on beneath the surface, such as changes in the composition of the pupil intake at individual schools. But that’s a story for another day.

There’s been some speculation recently that the EBacc is dead. Could this be another nail in its coffin?