Posted on August 25, 2022 by teachingbattleground

Today sees the release of the first set of GCSE results awarded by public examination since before the start of the pandemic. Both JCQ and Ofqual have produced high-level national statistics summarising attainment overall and in different subjects.

In this post, we pick out some key highlights from the published statistics. Some of them leave us curious. More thorough analysis will emerge as more data becomes available.

Ofqual signalled over a year ago their ambition for results to come back in line with standards in 2019 by 2023.

This year results saw a move back in that direction. However, as we shall see more clearly in the next section, results for 2022 were higher than the midpoint for 2019. 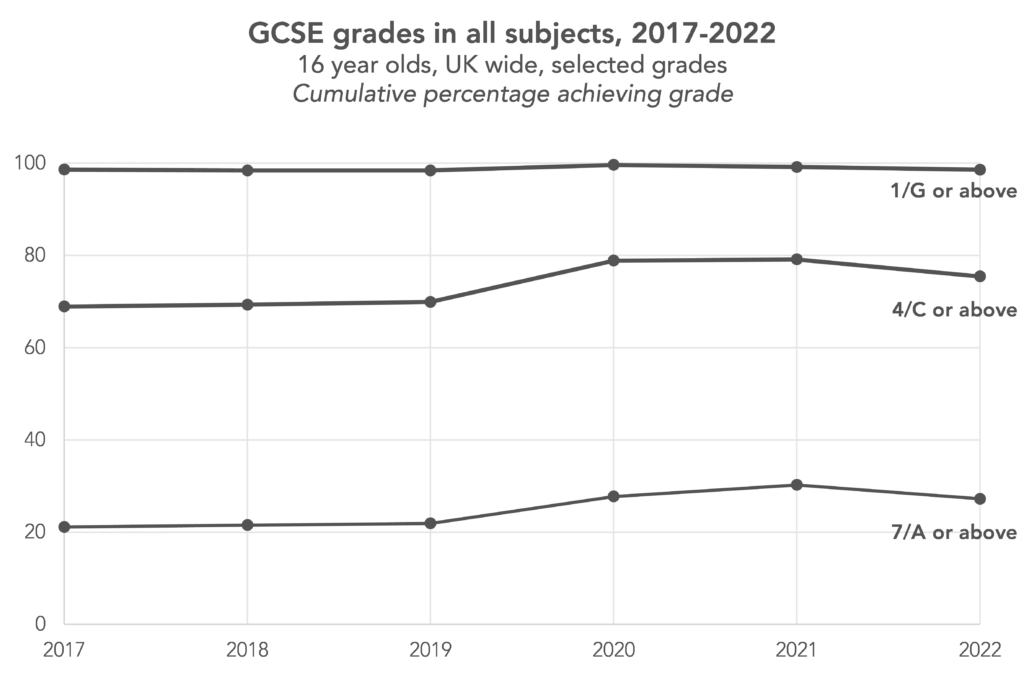 The percentage of entries by 16 year olds in all subjects awarded grades 9-4 (or A*-C in Wales and Northern Ireland) increased by over 8 percentage points between 2019 and 2021.

However, since 2021 this percentage fell by just 3 percentage points.

Should Ofqual wish to stick to its ambition to return to 2019 standards by 2023 then we will see larger falls in attainment next year. The reason they have set standards higher than the midpoint between 2019 and 2021 this year is not yet clear.

This was also true in most subjects

In individual subjects, particularly those with smaller numbers of entrants, we might expect to see variation in results from year to year due to changes in the prior attainment profile of the cohort.

That notwithstanding, at both grades 7/A and 4/C, in most subjects results were above the midpoint of 2019 and 2021. 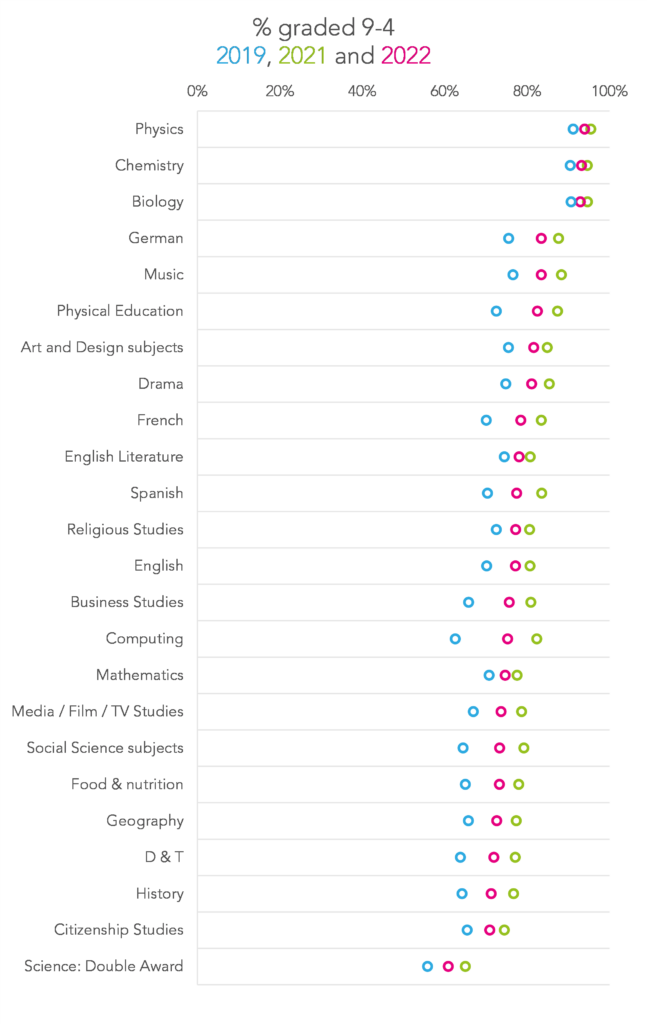 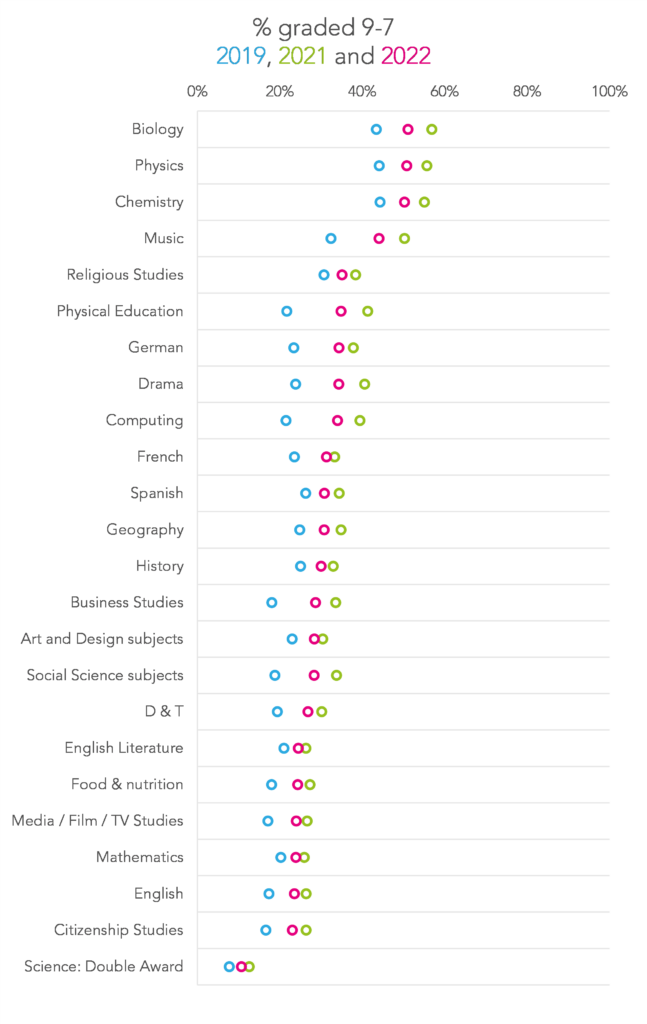 Why are entries in languages down?

In our preview post yesterday, we expected entries in modern foreign languages to increase.

Yet today’s data from JCQ suggests that, despite an increasing population, they have actually fallen in French, German and Spanish. 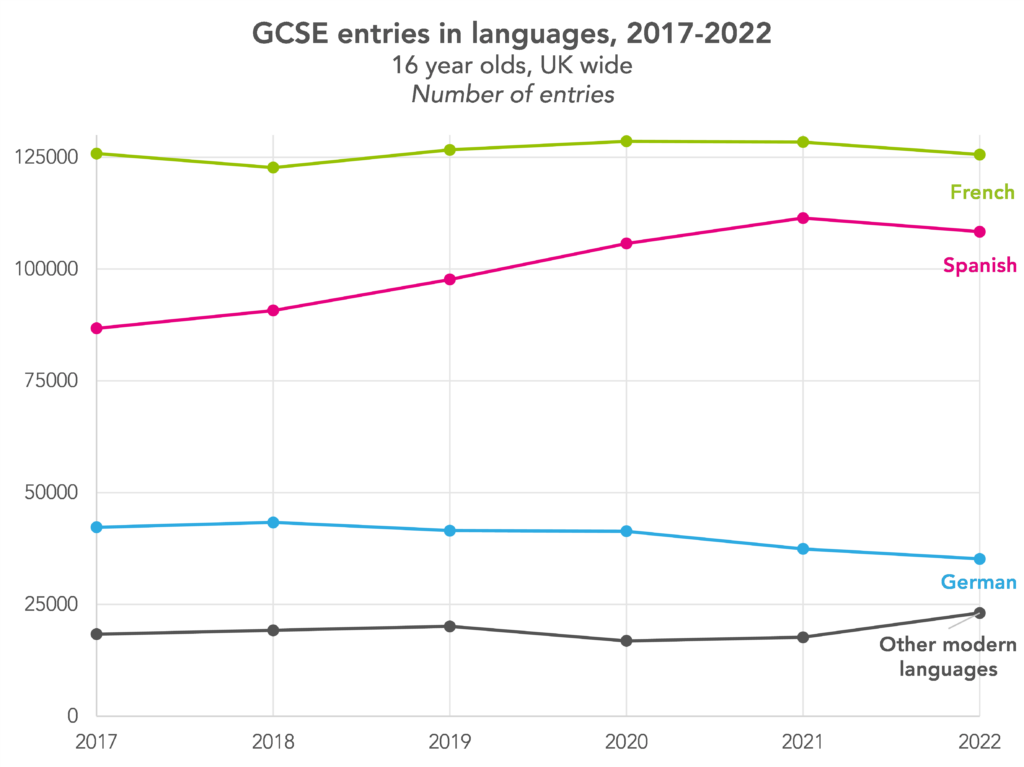 The percentage of entries at independent schools awarded grades 9-7 in England increased by 14 percentage points between 2019 and 2021.

With the return to exams, this percentage fell by 8 percentage points. 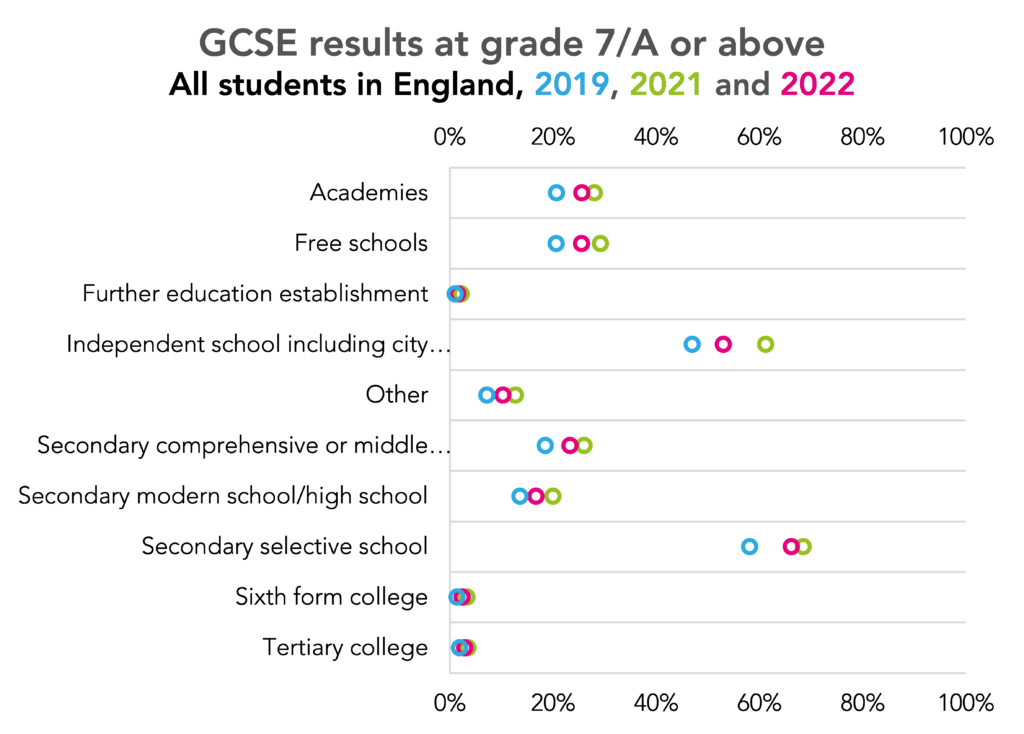 By contrast, the percentage of grade 9-7 awards at schools classified as secondary selective fell by just 2 percentage points.

We previously expressed doubts about the increases in attainment at grade 7 and above in independent schools in 2020 and 2021. You can see these pieces here and here.

As a quick aside, JCQ and Ofqual use the National Centre Number (NCN) Register to classify schools rather than the Department for Education Get Information About Schools database. These are self-reported by centres. Selective academies have the option of classifying themselves as selective schools or academies. Consequently only 83 of the 164 selective schools in England are classified as such on the NCN.

Has the North-South gap increased?

As we showed in our preview post yesterday, pupil absence among Year 11 pupils was lowest in London during the pandemic.

Since 2019, the percentage of entries awarded grade 9-7 in the capital has increased by almost 7 percentage points, almost double the increase of the neighbouring South East region. Both regions had the same level of attainment at this threshold in 2019. The South East though was one of the two regions (along with the South West) with the highest rates of pupil absence in Year 11. 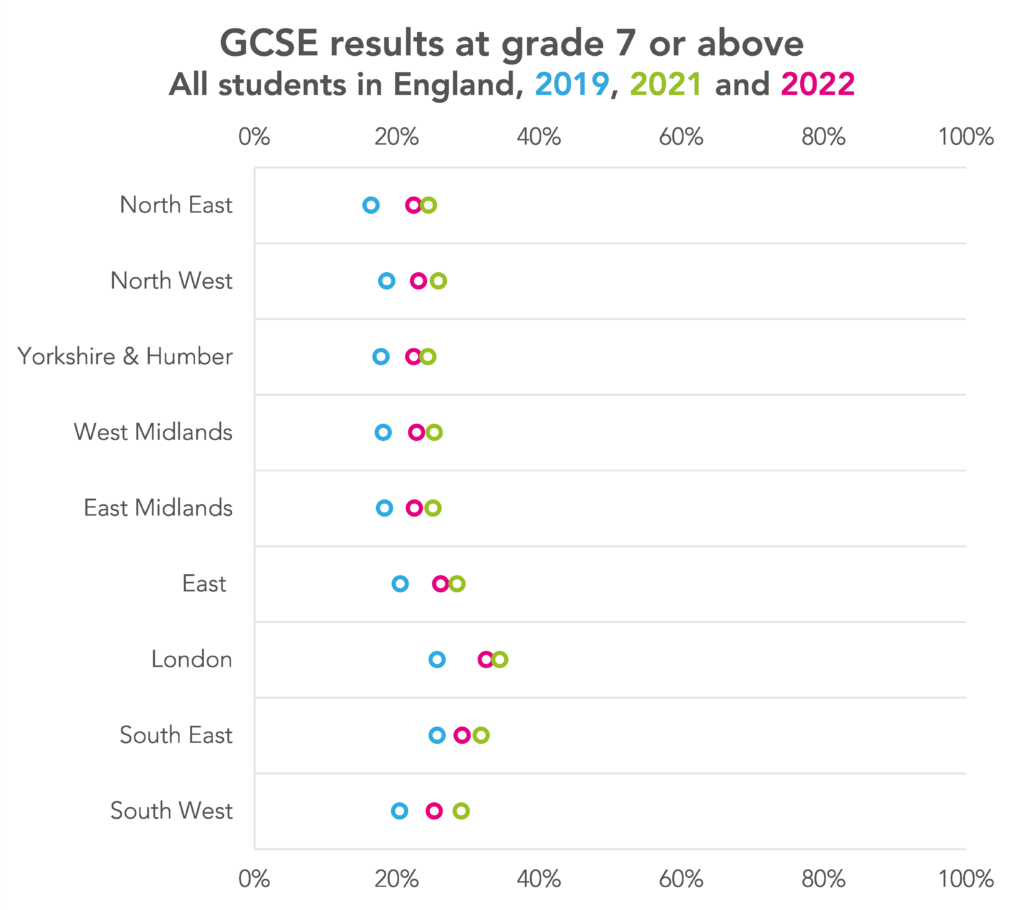 It is also worth noting that attainment on this measure increased by 6 percentage points in the North East despite this region having the highest rates of absence for this cohort over the last two years.

At the moment we’re dealing with very high level data published by JCQ and Ofqual. We’ll be saying more about the links between absence and attainment over the next week.

The National Reference Test showed a fall in performance in maths, but not in English

The National Reference Test (NRT) is a fairly new idea, with the first tests taking place in 2017. Briefly, a sample of Year 11 pupils take a set of English and maths tests in the spring before their GCSEs. If the results show that performance is higher or lower than usual, Ofqual can ask exam boards to adjust grade boundaries.

This year, Ofqual took the decision not to ask for any adjustments based on the NRT no matter what it showed. But the results are still interesting.

They show that performance in English was slightly lower this year than it was pre-pandemic, but official analysis shows that the difference is not statistically significant. But there was a significant fall in performance in maths.

This is yet another piece of evidence on how attainment, particularly in maths, has been negatively impacted by the pandemic.

We go into the results of the NRT in more detail here.

The gender gap hasn’t moved much, but boys are ahead for top grades in maths again

Girls tend to outperform boys on almost every metric at GCSE. Last year saw a widening of the gap at grades 9-7, and a narrowing at grades 9-4.

2020 and 2021 saw a long-standing trend bucked: girls outperformed boys at the top grades in maths. This has been reversed this year, with boys achieving 0.8pp more 9-7 grades than girls.

One area which has not followed the pattern of results falling between 2019 and 2021 is 9-4 grades in English and maths for older learners.

This likely reflects differences in the prior attainment of this cohort compared with 2019’s. Proportionately more students would have achieved grade 4 or above through CAGs and TAGs in 2020 and 2021 and so would not have had to resit English and maths.