Did independent schools really “fiddle” their A-Level grades more than other schools in 2021? – Education Datalab blog

Posted on August 23, 2022 by teachingbattleground

It’s August. And that can mean only one thing – results season is back!

Of course, when A-Level results were released last Thursday, one specific thing grabbed the headlines – the sharp fall in 2022 grades compared to 2020 and 2021.

This was entirely predictable. And, actually, wasn’t that newsworthy. Ofqual told us that 2022 grades would sit midway between those awarded in 2019 and 2021 almost a year ago.

But what also caught a lot of people’s attention was how the fall in grades differed between different groups and, in particular, different centre types.

For instance, Chris Giles from the FT tweeted the following graph along with the words “guess which type of school fiddled A-level grades when they graded themselves?”. 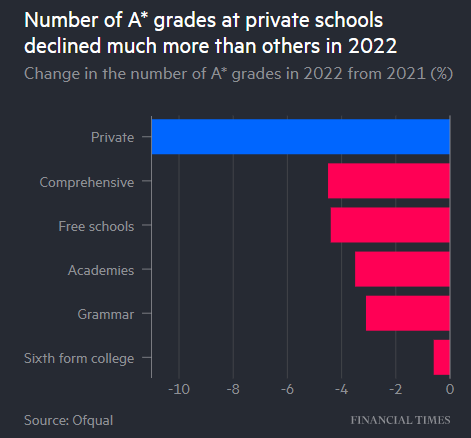 But did A-Level grades really fall by more at independent schools between 2022 and 2021 than in other centres?

Well, it all depends upon how you measure it…….

The figures that Chris Giles reported – and which many commentators picked up on – referred to the absolute difference in percentages achieving certain grades in 2022 compared to 2021.

So in Table 1 below – which reports the percent of entrants receiving A/A* grades – one simply takes the difference between the percentage for 2021 and 2022. 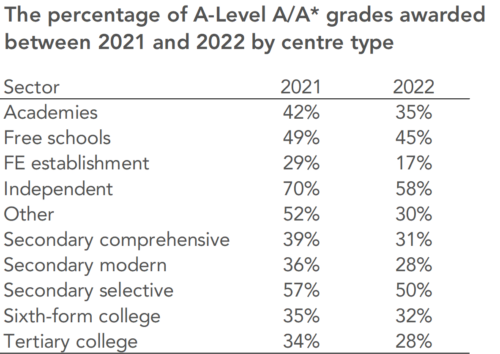 The chart below presents a visual representation of this absolute probability difference. 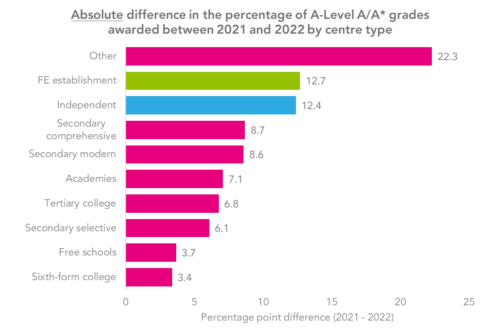 It looks like independent schools (blue bar) are amongst those suffering the greatest declines. Yet there have been sizeable absolute falls elsewhere (e.g. at further education colleges – green bar) as well. 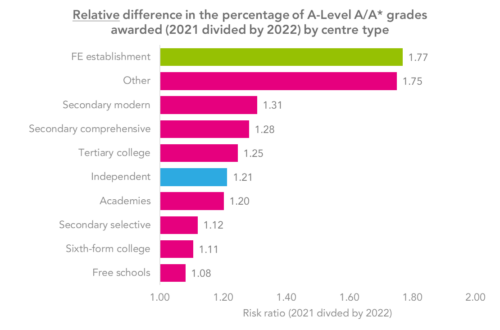 In terms of relative risk, independent schools are somewhat middle of the road. Their students were around 20% more likely to receive an A/A* grade in 2021 than in 2022, but the same is pretty much true for academies, comprehensive schools and secondary moderns.

In fact, it is further education and “other” establishments where the relative change has been greatest; students in such centres were almost 80% more likely to receive an A/A* grade last year than this.

So which measure should we use?

In a nutshell, both!

One can always cut and present data in different ways. And, most of the time, if you torture the data enough, you can probably get it to tell the story you want.

It’s therefore often recommended that both relative and absolute measures are presented when comparing probabilities across groups or timepoints. This gives the most complete – and transparent – picture possible.

So did independent schools “fiddle” the grades more in 2021 than other centres?

Such claims seem a little harsh to me.

Whether the difference in grades between 2021 and 2022 is greater for independent schools than other centre types really does depend on whether one is talking in an absolute or relative sense.

And there does seem to be a reasonable case that further education colleges – which were left off Chris Giles’ chart – saw an even greater decline in A-Level grades between 2022 and 2021 than independent schools.